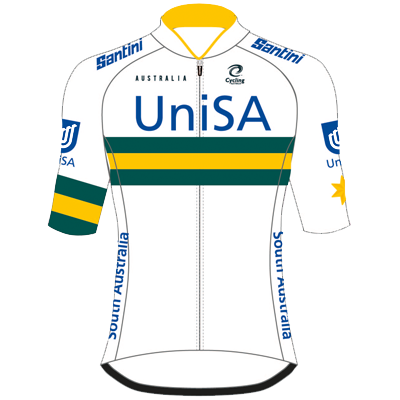 Racing at the Santos Tour Down Under since 2001, the UniSA-Australia team is home to Australia's best uncontracted cyclists, and has proved successful at chalking up wins across multiple classifications.

Aside from its breakthrough general classification victory in 2004 at the hands of Patrick Jonker, the team has won three teams classifications (2004, 2006 and 2007) as well as several Young Rider and King of the Mountain competitions.

The University of South Australia is the naming rights sponsor for the Australian National Team when it competes at the Santos Tour Down Under. It's 17-edition association has seen it claim the general classification in 2004 with Pat Jonker. Conspicuous in their blue bibs and white jerseys with the Australian green and gold stripes, the riders assigned to the team are known to launch attacks from the front of the peloton to try catch the eye of the sports directors visiting from overseas.